History of Budo: One

As an addendum to the Warriors of Budo series this two part history of Budo is offered at a low introductory price.

A two part series on the history of Budo and the culture of the martial arts. This is a long unabridged interview with professor Takashi Uozumi which took place in his office and library at the International Budo University in Japan. He served as director of the Budo and Sports Research Institute. Professor Takashi Uozumi is also considered the world’s best authority on the swordmaster Miyamoto Musashi and has researched and published many articles and papers on this famous masterless Samurai. He has also written extensively on Kyujutsu and the Eugen Herrigel and Awa Kenzo story which is the basis for Zen in the Art of Archery. Part one also features a guest appearance by author and historian William Scott Wilson, the world’s foremost translator of Japanese and Chinese classic texts. William Scott Wilson needs no introduction to the martial arts community both in Japan and in the west where he has many books published by Kodansha International and Shambhala. His ground-breaking translation of the Hagakure and Book of Five Rings cemented his authority on translating ancient Japanese classics.

Part One covers the period of 1600 to 1850 beginning with the battle of Sekigahara. This gave control of Japan to the Tokugawa Bakufu. After four centuries of bloody civil wars between various Daimyo and their Samurai, a long period of peace was to follow. This led to Bujutsu, the classical martial arts practiced by the Samurai during peace. While there was no enemy during the peacetime, the Samurai would continue honing his martial skills by practicing in the dojo. In the 17th century we see the emergence and rapid spread of the Ryu-ha or schools of martial arts. In Kenjutsu alone, there was said to be five hundred different schools. The emphasis was on Kenjutsu or swordmanship as the Samurai was expected to carry a katana at all times when in public.  Kenjutsu practice was carried out with the Bokuto or wooden sword. Part one ends as we approach mid 19th century and the modernization of Japan starts to take hold with the dawn of the Meiji restoration. Part two will cover period when Martial technique or Bujutsu transforms into modern Budo.

I watched both part one and part two of the History of Budo. Thank you for being such a great source of information to me! 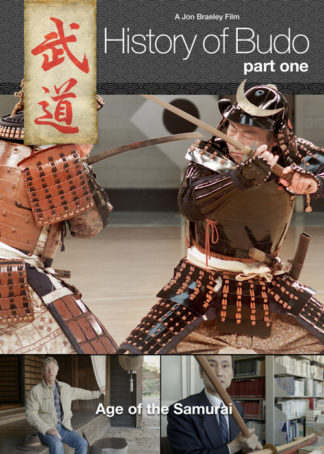