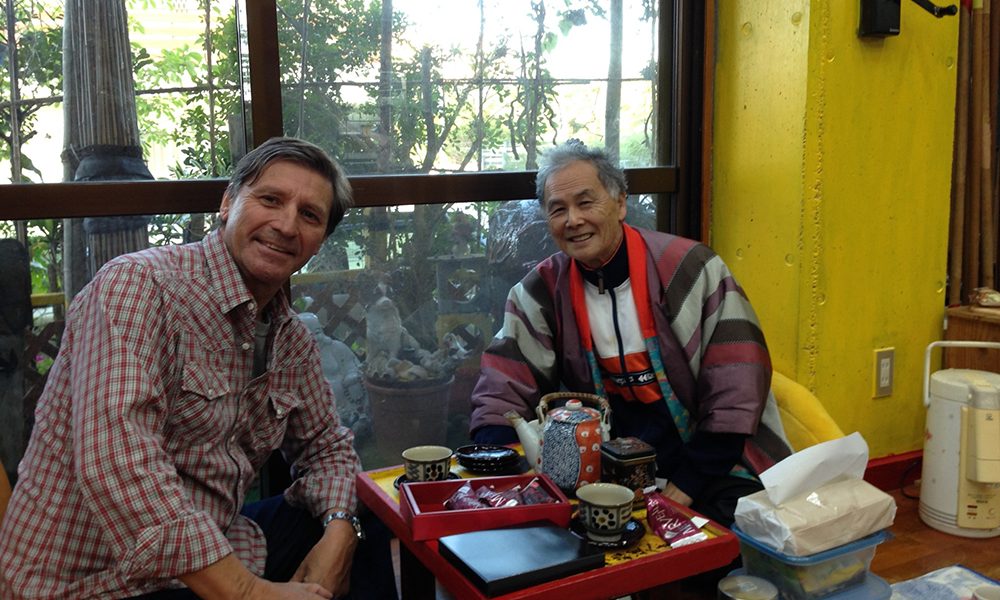 Tetsuhiro Hokama, 10th Dan may not be as well known around the world as some Karate masters, but in the island of Okinawa he is a legend. He is a Karate master who has dedicated his life researching the history of Karate. He is known as “The Keeper of Okinawa’s secrets.”
I also doubt if Tetsuhiro Hokama can find the time to travel abroad as he keeps very busy teaching Goju Ryu Karate and running the first museum in the world dedicated to Kobudo and Karate. He is also President of the Okinawa Goju-Ryu Kenshi-kai Karate-do Kobudo Association.

Tetsuhiro Hokama was born in 1944 and learned Shuri-te from his uncle, Mr. Seiken Tokuyama. After a short time at the age of 16 years he joined the Karate club at his high school. As the birthplace of Karate, Okinawa’s schools were able to add Karate to it’s sports curriculum long before it became popular in Japan. The Karate museum is on the second floor of Tetsuhiro Hokama’s dojo located in the Aza-Uehara, Nishihara-cho neighborhood of Okinawa. It is a thirty minute car ride from the capital city, Naha. On the day we arrived, Hokama was going to kindly take us on a tour of the museum then let us join his afternoon Karate class with some young students. As a Karate enthusiast this was going to be a very good day for me.

But of course, before we went upstairs to see the more than 500 items from Karate’s rich history, we would sit down to drink tea and chat with our very gracious host, Tetsuhiro Hokama. We took our tea in a small conservatory in front of his ground floor dojo. The dojo had double floor height ceilings and compared to the small dojos we usually see in the USA, this one was very grand.

First I wanted to ask Hokama about the beginning of Karate. He replied “At first there were no Karate ryu-ha (schools) in Japan. In the old days, here was the Ryukyu Kingdom (Okinawa). In Japan there was Judo, Kendo, Naginata, Aikido, and so on. There was no Karate. It was first taken there around 1922, at the time of Gichin Funakoshi sensei, as well as Motobu Kochi sensei. In Okinawa there were no ryu-ha (schools). It was simply known as Shuri-te, Naha-te, Tomari-te or Kobudo. However, as the progress or adaptation to ryu-ha continued, Naha-te became Goju-ryu. Shuri-te became Shorin-ryu, written either as ‘small forest’, ‘little forest’, or ‘pine forest’. The Shuri-te which was taken to Japan was changed to Shotokan. The Japanese changed the names from the influence of China. This is the origin or start of the ryu-ha or different styles of Karate.” I asked Hokama about the first Karate teachers in Okinawa and he went on, “The first sensei from the time when the immigrants and traders came from China was called Yabu, which became Hokkama. Then came Araki Seisho, and next came Higaonna Kanryo, who was followed by Miyagi Chojun, and after him Higa Seiko sensei, and then we are under Higa Seiko sensei. Fukuchi sensei and I are under Higa Seikio sensei. Goju-ryu has been passed on as one line like this. From Higaonna Kanryo and Miyagi Chojun various ramifications take place. Now there are eight groups which form Goju-ryu. This is the flow of how things went here in Okinawa.” 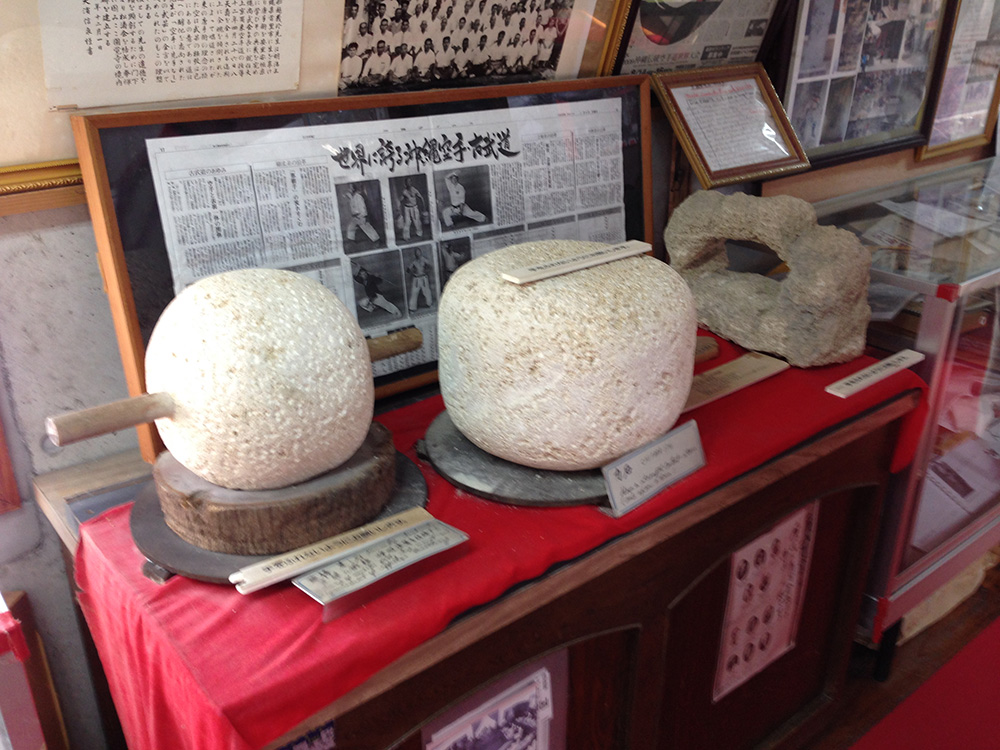 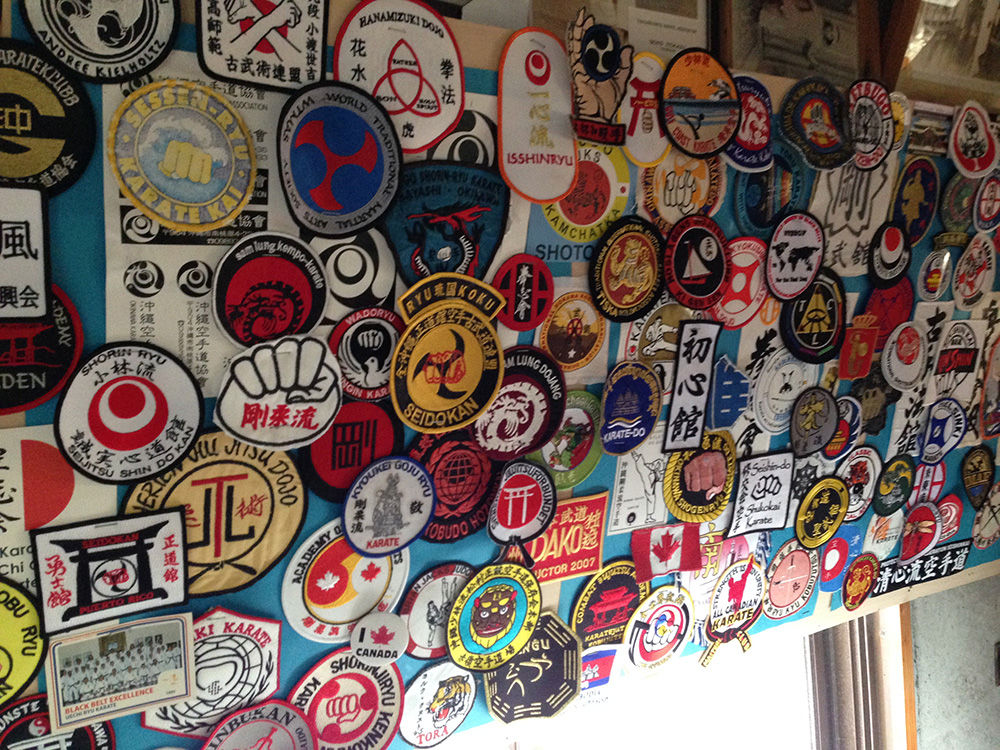 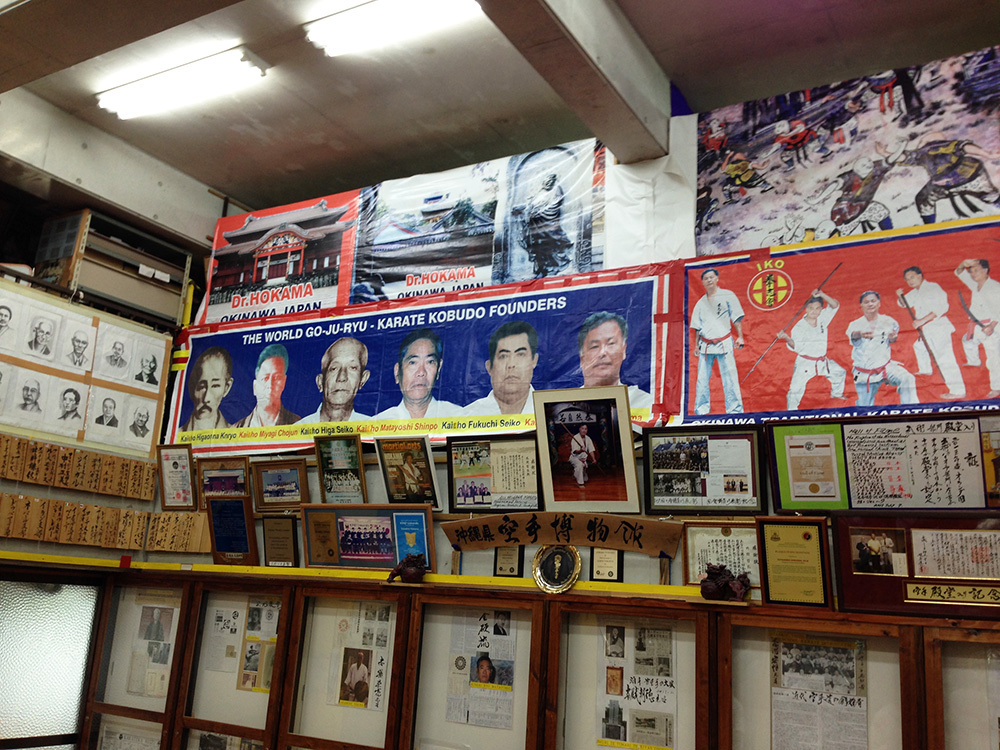 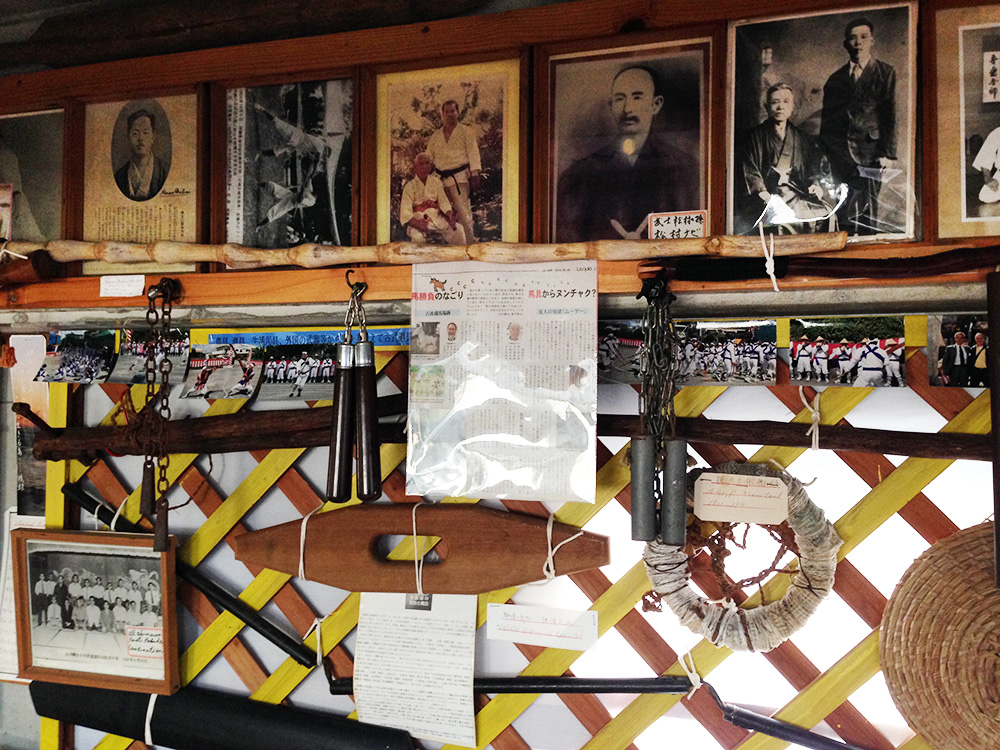 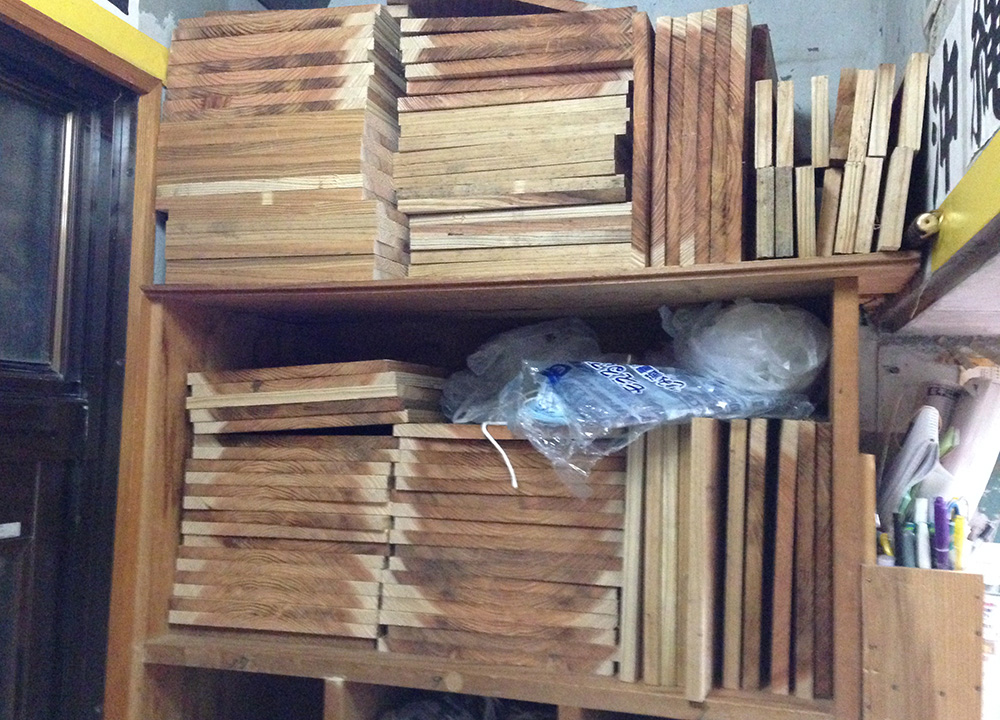 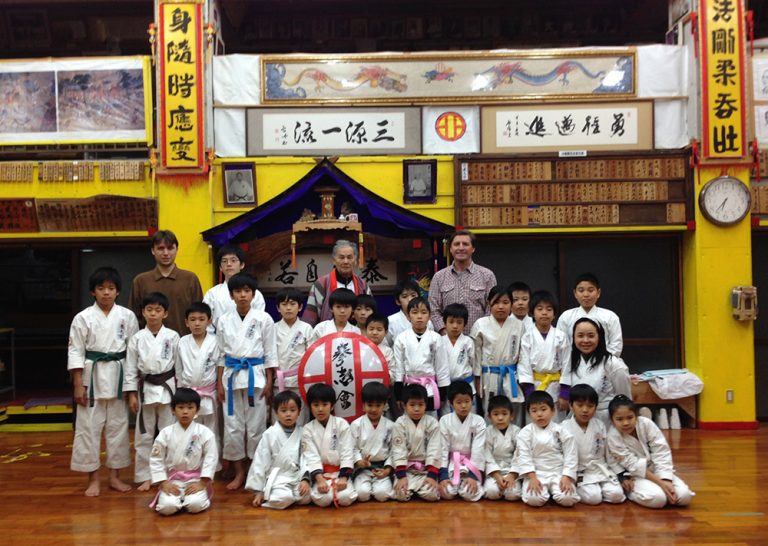 At last we walked up the stairs from the dojo and entered the musem. It is actually a labrynth of small rooms covered from floor to ceiling with artifacts from photos and certificates to weapns from all over the world and personal memorabilia donated by instructors. It is breathtaking the scope of the collection. The first this that caught my eye was a poster size photo of a bruised and calloused fist and I asked Hokama sensei about this and he told me, “This picture is from my friend. Yabiku Masakatsu sensei, but last year he passed away. He was a policeman, and he was very strong at punching the makiwara. He was from Uechi-ryu but changed to Yabiku-ryu. He lived in Yaeyama Island. He was my senior and my friend. When Yabiku sensei hit the makiwara you could clearly see that in his knuckle bones. One can see that the training method is different in the old days. The hands and feet were toughened to a very strong hardness. The makiwara in Okinawa is used to forge the fists. I think that’s the main characteristic of Okinawan Karate.”

Futher into the museum we came across a collection of large rocks… actually large stones polished smooth. Even with both hands, only a strong person could lift one. I asked our host and museum guide about them. “This is called chikara-ishi (power stone)” said Hokama. “This type of stone were placed in front of the community center. There the strong people of the town would dare each other about who could carry it more times and win bets. There was no television and this is how they passed the time. Okinawa is a place where human relationships are very strong, and in this context these stones played a role. It is not just a stone, but through it people came together. It is a stone that builds culture. And the stones found their way into the Karate training. You see this kind of culture is very valued in Okinawa. It’s not just a stone. The Karate practitioners would strike them to toughen their hands and feet. So the stones found more use. In this way the stones have a soul.”

There was a story like the large stones with almost every item on display in the museum but unfortunately Hokama sensei needed to teach his class and the students were already waiting below us in the dojo. We went downstairs and arranged our cameras ready to film the Karate class. But I think I will leave this Karate class for another post later.