Mixing a martial art with religion can be traced back to China over fifteen hundred years ago. Shorinji Kempo  means ‘Shaolin Temple Way of the Fist’ and is both a fighting art and a religion established by Doshin So, referred to as Kaiso today. It is a unique combination of Karate style punches and kicks with the fluid throws of Aikido and joint-locks of Jujutsu. Shorinji Kempo is also a religion whose philosophy called Kongo Zen is based on early Buddhist scriptures. It’s headquarters where our filming takes place is an institution for the development of the mind and body. Shorinji Kempo embodies the principles of Kenzen-Ichinyo, where the physical technique (body) and the spiritual (mind) are one and the same. In this episode we explore the Warriors of Shorinji Kempo.

In practice each partner is working to improve the others respective technique. The result is Embu. A demonstration of sequences of techniques that are dynamic, fluid and full of energy. Embu is likened to prayers. “It is Zen in Motion” says Tsunehiro Arai, the chief Hombu instructor and president of the Shorinji Kempo Federation. “One has to focus and spiritually unite with the opponent”. Kaiso’s daughter Yuuki So repeats her fathers mantra “Half for your own happiness, half for the happiness of others.” She explains, “This means before you can help others you must first help yourself.”

The mission of Shorinji Kempo is to achieve this by cultivating people who can contribute to society. Kaiso would put this more simply as “Country building through people building.” In this episode we will take you to the Shorinji Kempo Headquarters in Tadotsu, Japan where you will witness the legacy established by Kaiso. Sensei Tsunehiro Arai states, “Kaiso did not create Shorinji Kempo to be one more school of martial arts. The objective is to construct an ideal society to live in.”

This was very inspiring. And the fact that the founder created this style to rejuvenate Japan’s young people is commendable.

That’s a remarkable episode, thank’s for your hard work ! Gassho to all fellow kenshin’s from SK Porto Alegre Center branch.

I have now downloaded the first three episodes in the Warriors of Budo series. All three are excellent. Empty Mind Films is a name associated with high quality and this series is no exception. I give them five stars out of five. 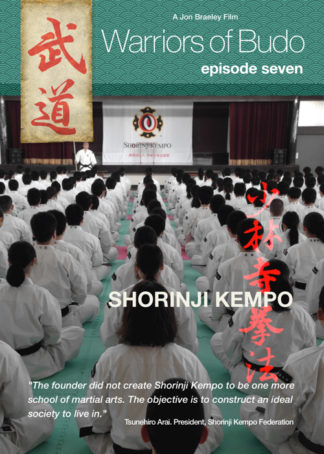