View cart “The Last Clan” has been added to your cart.
Sale!

They live as a collective in a family-based commune. Their home is a massive structure called the Tulou, where as many as five hundred family members share an ancient way of life. But as China modernizes and the young move to the city, life in the Tulou is disintegrating. One man chooses to avoid extinction by transforming his Tulou into a tourist spot. But is this the answer? This is the last Clan: a people’s struggle to survive. Available as a HD 1080p digital download.

They are a model of socialism. Living as a collective and as equals in a family-based commune. The last Clan: a people’s struggle to survive are the Hakka from the mountainous region of South East China. Their home is a fortress-like structure called the Tulou, where as many as five hundred family members share an ancient way of life. The Tulou are enormous round shaped structures made of thick rammed earth walls enclosing a round courtyard. This will house as many as one hundred households living as a collective – helping each other and sharing the work. These huge round structures attracted the attention of the CIA during the sixties cold war and satellite images convinced the NSA they were looking at nuclear missile silos! Only after navy seals visited the Tulous undercover did they realize these were the unique homes of the Hakka clan.

“We all live in the same Tulou and we have the same ancestors” says one 82 year old resident of one of the most beautiful of the Tulous called Tianluokeng “But the young ones are all leaving to work outside now.” The Tulou is one of the world’s most unique buildings and life in the countryside can be idyllic. But as China modernizes and its cities expand, life in the Tulou is slowly disintegrating. As the young move away to find work, only old family members are left to endure the hardships of rural life. ” I live here” says another male resident “but I can only find work cleaning the homes…I earn US$120 per month.” One man chooses to avoid extinction by transforming his massive Tulou and the local village it occupies into a popular tourist hot spot.”It can be said that I was the first person to develop tourism here, no came before this” says Tulou owner Lin Rigeng ” Now young people are not leaving the village. More than 160 rooms are allocated to the government tourist board.” The trend has grown and the Hakka are quickly flooded with strangers walking among their homes. It is estimated that over three million tourists will visit the Tulous in 2010. The local residents soon realize that tourism is a two-headed monster that brings promises of wealth but threatens to destroy their ancient culture. The wealth that everyone expected to flow into the poorest areas never appeared or was diverted elsewhere. “We villagers get nothing from this” says an angry local “we do not get a spoon from ticket sales, all the money goes back to the tourist board.”

As the tourist buses continue to climb up and down the small village roads, tensions rise among the villagers with some enjoying the benefits and others not so lucky… the ideal social commune is no longer so equal. One thing they all agree upon, is that young people are coming back to the Tulou life and more are staying behind selling souvenirs to the visitors. Today the Tulou and the Hakka are in danger of extinction, as society fragments and splits with new found freedom and new found wealth for the new generations of Chinese. This is the remarkable story of a clan’s struggle to survive. 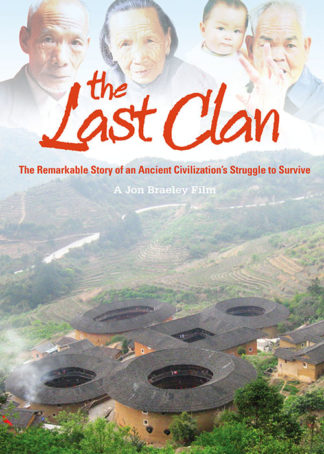