As an addendum to the Warriors of Budo series this two part History of Budo is offered at a low introductory price.

A two part series on the history of Budo and the culture of the martial arts. This is a long unabridged interview with professor Takashi Uozumi which took place in his office and library at the International Budo University. He served as director of the Budo and Sports Research Institute. Professor Takashi Uozumi is also considered the world’s best authority on the swordmaster Miyamoto Musashi and has researched and published many articles and papers on this famous masterless Samurai. He has also written extensively on Kyujutsu and the Eugen Herrigel and Awa Kenzo story which is the basis for Zen in the Art of Archery.

Part two commences at the dawn of the Meiji Restoration and Japan’s transformation from feudal domains ruled by warlords to a country ruled by a single government. The Samurai class were abolished and along with it the wearing of the katana and the top-knot hairstyle. Reforms would sweep the nation. The traditional martial arts or Bujutsu, would also experience many changes as its usefulness is questioned by a more progressive society. To practice martial arts as Budo is to take a different path and develop one’s character as well as one’s skills. The sword and zen are one. Today, the growing internationalization of Budo which includes Karate, Kendo, Judo, Aikido, Shorinji Kempo and Kyudo will bring more changes as Japan sees it’s role as gatekeeper slowly slipping away.

In Part Two of History of Budo Professor Uozumi talks first about the transformation of Jujutsu into Judo or ‘Jutsu’ into ‘Do’ and secondly how Judo was accepted into the education system. This led to a wider acceptance of Budo as an educational tool. He covers each Budo in detail with Kendo, Karate, Judo and Kyudo being widely accepted in student curriculums. Perhaps the most contentious issue today is the sportification of Budo and the culture of ‘winning at all costs’ that this inevitably creates. Which brings us to the question we must all ask: How do we maintain the traditional values of Budo under these circumstances?

I watched both part one and part two of the History of Budo. Thank you for being such a great source of information to me! 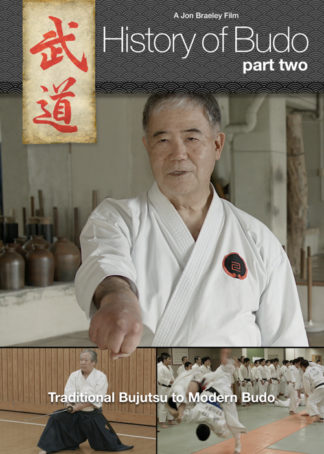